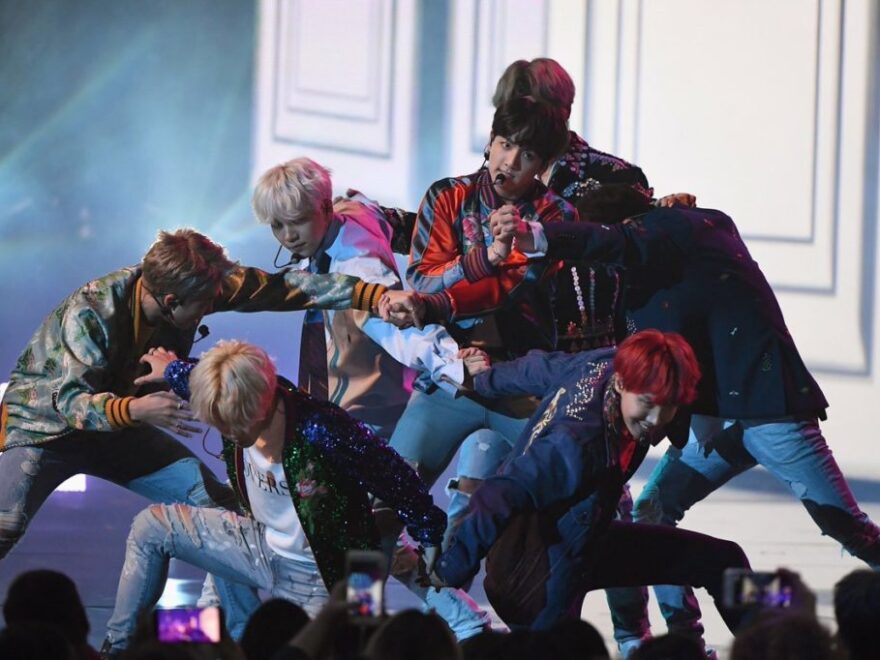 It would have been wonderful if I’d started this blog when I started liking K-pop, but I didn’t know it would matter so much to me. It’s generally only in retrospect that we realize the importance of small moments. So I need to take a look in my rearview mirror to the moment when the seed of my K-pop obsession was planted.

It’s November 19, 2017 in Manhattan Beach, California, and our family is on break for the Thanksgiving holiday. We’re staying with my in-laws, and my 16-yr-old daughter December has been nervous all day that her grandparents’ DVR be perfectly set to record the American Music Awards. Her favorite K-pop group BTS will be performing. My in-laws assure her that the DVR is set and she will not miss a second of it, including the red carpet interviews. We settle in after dinner to watch the recording, and of course she fast-forwards straight to BTS on the red carpet. This is my first time seeing what BTS look like, and I’ve yet to hear a note of their music. Right off the bat I comment that they look really pretty. I think my daughter says something to the effect of “mom, it’s K-pop” and proceeds to pause the screen so she can tell me each of their names, the role they play in the group, and tell me who her bias is (after explaining to me what a bias is – that is, one’s favorite member of the group). “Most people bias Jungkook, but my bias is Suga,” she explains. I ask her why and she tells me it’s because she likes his voice and his personality. She tells me to pick a bias, and I pick “the one speaking English, his name is RM, right?” She asks why I like RM and I tell her it’s because, “He’s really cute. I like his dimples. And I could talk to him, he speaks English.” She tells me RM is not a bias of hers, but not because she doesn’t like him, only because she likes the others a little more. She assures me that all seven of them are “Amazing, mom. They’re AMAZING.”

BTS really are super cute and charming on the red carpet, and I could immediately see why my daughter adores them, visually and personality-wise. American groups are simply not this charming in interviews.  I’ve since learned that charm is key to being an idol, that in fact idols are trained in how to be charming. But on Nov. 19, 2017, I still thought this quality was unique to BTS alone, and it really endeared them to me right away. I was really looking forward to their AMA performance!

I’m sure we watched every one of the AMA performances that night, but the only one I remember was BTS doing DNA. Keep in mind, I wasn’t just hearing DNA for the first time, I was seeing BTS perform for the first time. Immediately I started gushing about how great they are at dancing, how in sync they are… and as much as I hate to admit it, I also made some comments that I’m embarrassed by now, but I gotta be honest about my reactions…

Me: “They are really SO pretty.” December: “Mom, you already said that.” I know, but I guess I was really taken by surprise by this aspect. **I wasn’t saying this negatively** let me stress. It was refreshing to see a boy band that didn’t act annoyingly “bro-like.” BTS wore make-up and fashionable clothes and were almost feminine in a masculine way, if that’s a thing. As silly as it sounds, I felt a sense of relief that my teen daughter was fan-girling over a group that didn’t seem like the type to take advantage of under-age groupies. I didn’t know at the time that K-pop boy bands, in general (there are exceptions), present a “prettier” appearance than western boy bands. Here in the states, we might consider this softer/prettier appearance as feminine or androgynous, but in K-pop, it’s simply the standard of beauty.

Me: “Why are they lip-synching?” December: “Mom, they aren’t lip-synching, they’re singing along to a backing track.” Hmmm… “They can’t possibly be singing, they’re dancing too vigorously!” Ahhh, Christine, welcome to the world of Kpop where singers spend endless hours running while singing, planking while singing, doing sit ups while singing… day after day after day… for years. I didn’t know the rigors of idol training when I watched the AMAs, so of course I was suspicious that artists could actually sing and dance that well at the same time. It’s truly unbelievable if you’ve never seen it before, and I was really suspect. Later, thankfully, December showed me video evidence of BTS singing DNA live on the AMAs along to their backing track and I was put soundly in my place. Yes, they sang live at the AMAs.

Me: “Holy crap, they can really dance! I mean REALLY dance!” December: “We been knew, Mom.” Like everyone that watched BTS for the first time on the AMAs that night, I was blown away by their dance talent. Blown. The eff. Away. Can I say this again? BTS CAN REALLY REALLY DANCE. Like, better than 95% of the western pop acts I’ve seen in my life. Watching BTS perform made me feel lazy and embarrassed for what I consider talented pop acts. I realize there are some five-percenters like Usher, Bruno, J.Lo, etc that can sing and dance. But those few are solo artists that do their choreo with backup dancers who *aren’t singing*. Imagine Usher, Jason Derulo, Bruno Mars, Chris Brown, JT, and Ne-Yo in one pop group together. And that’s just six people, BTS has seven! Our American boy bands don’t even come close to BTS in the dance category. If nothing else was going to hook me on November 19th, it was BTS’ ability to sing and dance in perfectly choreographed synchronization. I’ve since watched every single BTS dance practice video I can find, and I’m still blown away by them. Watching BTS dance humbles me. It should humble every western pop music fan.

So I said in the beginning that BTS’ appearance at the AMAs was the seed of my K-pop obsession, but that really isn’t the correct metaphor. One of my hobbies is gardening, so I plant seeds all the time. Seeds are slow, they take time, weeks and months to become fruitful and harvestable. BTS on the AMAs wasn’t a seed, it was a spark that ignited a grass fire of fandom which is only barely contained over half a year later. I’ve heard that an intense obsession should only last 6-8 weeks, and if it lasts longer, it’s crossed from healthy to insane.